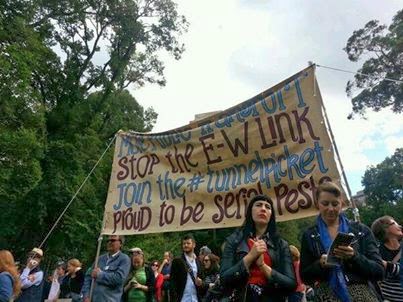 No East West Tunnel - Take the pledge: "Why did #tunnelpicket join March In March Australia 2014? It might have something to do with this quote from Tony Abbott's book:

“In Australia’s biggest cities, public transport is generally slow, expensive, not especially reliable and still hideous drain on the public purse. Part of the problem is inefficient, overmanned, union-dominated government run train and bus systems. Mostly though, …there just aren’t enough people wanting to go from a particular place to a particular destination at a particular time to justify any vehicle larger than a car, and cars need roads.”"
at 12:01 PM