Green Left Weekly: "The conference panels and workshops will include: Beyond the carbon price: confronting the climate crisis today; No radioactive dump in western Sydney; the case for free public transport; breaking the fossil fuels addiction: towards a zero carbon Australia; and the campaign to stop coal seam gas mining."

Does your city care about #walkability? It should, people are checking this index.

City's walkability lags Tasmania News - The Mercury - The Voice of Tasmania: "HOBART has been caught dawdling in the pedestrian stakes, says a new survey that ranks the Tasmanian capital 19th in a list of Australia's most walkable cities.

The WalkScore rating system, which calculates the ability of residents to live a car-free lifestyle, has Hobart trailing centres including Dubbo, Lismore and Geelong."

Algal fuels key to nation's energy independence - On Line Opinion - 23/4/2013: "Just days into a major Middle East or Southeast Asian conflict, Australian cars and trucks could be immobilised, public transport overwhelmed and supplies of life-saving medications would begin running out.
Within a week, shops would be stripped of food and farmers' tractors would be silent.
"Essentially, our society as we know it would cease to function," says former Royal Australian Air Force deputy chief John Blackburn in a recent NRMA report, warning of Australia's extreme vulnerability to an overseas fuel supply disruption."

Much better idea than algal fuels. Gradually abolish the private auto. Start in the cities, by making public transport fare-free and gradually banning cars.
at 8:10 AM 1 comment: 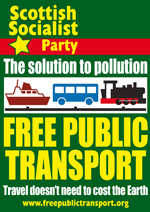 The SSP advocates replicating the remarkable success enjoyed in Hasselt on a nationwide basis by introducing free travel for all passengers on buses, trains, Glasgow's underground system, Edinburgh's trams and ferries.
at 11:00 PM No comments:

Cars are choking and bankrupting Australia

A new report by the Victorian Auditor General, Managing traffic congestion, argues governments need to think harder about ways to deal with the problem.

He says there’s too much attention given to increasing the supply of road space as a way of tackling congestion and not enough to managing demand." 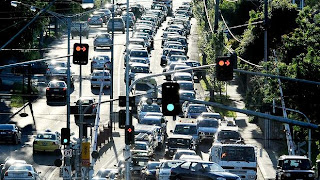 Traffic continues to rise at a rapid rate on the city's freeways and tollways. Photo: Joe Armao

The road to a standstill: "According to the state government, congestion has a significant impact on Victoria's ''productivity and liveability''. Indeed, the economic, social, and environmental costs of congestion have been calculated at more than $3 billion a year, which is expected to rise to $6.1 billion by 2020."

A "rat's nest of on and off ramps" for Melbourne

Abbott comment throws doubt on rail, road funding: "''If Tony Abbott is elected, it will be a disaster for inner-city Melbourne,'' he said. ''The suburbs that we love and that make Melbourne consistently one of the world's most liveable cities will be turned into a rat's nest of on and off ramps.''

''To suggest the federal government doesn't have a role in building public transport in major cities like Melbourne is 19th century thinking.''"

Car-free designs for Sydney's George St: "The city is contributing $220 million to the light rail project to make George Street one of the world's great plazas, with 25,000 square metres of roadway turned into a huge tree-lined pedestrian boulevard."