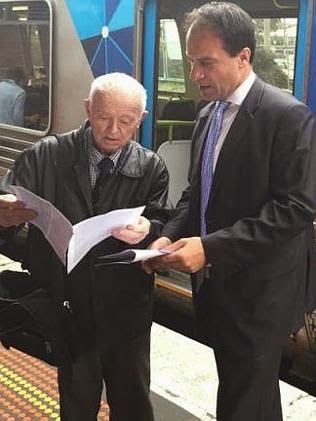 The Frankston MP yesterday announced he would submit a private members bill to give Victoria’s elderly population free travel on public transport if he was re-elected in November."
at 5:47 PM No comments:

brisbanetimes : "Momentum is building for public transport to be free in Brisbane throughout the three days of the G20 world leaders summit next month.

Commuter advocacy group Rail Back on Track has called for free public transport in the city throughout the three days, reasoning that Brisbane residents should be afforded the same opportunity as the 7000 summit delegates, who will all be given Go Cards for travel through the period."

Newcastle Herald: "THE best way to encourage people to leave their cars at home is by building cycleways suitable for daily commuting and developing fast, free and safe public transport systems.

Such measures would result in fewer accidents, faster travel times and cleaner air."
at 11:31 AM No comments:

Victorian election: this time, can we please talk about public transport?

The Guardian: "The evidence from around the world shows that cities that build their transport systems around public transport find that transport costs are less of a drain on the regional economy than those that put the car at the centre of their transport plans.

This is in part because of the huge public cost of building and maintaining roads, combined with the private costs of owning and running the family fleet of cars. It is also because of the high cost of the social isolation endured by the young, the old, and the increasing number of people who are cut off from jobs, hospitals, and social networks.

Public transport, along with cycling and walking, is part of the solution to transport’s contribution to the climate emergency, the reality of which we are experiencing with increasing frequency."
at 4:30 PM No comments: