Herald Sun: "Lobby group Fair Go for Pensioners will send a submission to the government to ask that pensioners receive free public transport seven days a week."
at 12:47 PM No comments:

Hot enough for you? It's #climatechange folks. The delayers were successful, but now let's take action.

Humans stoked Australia’s unprecedented ‘angry summer’ heat, study finds: "WASHINGTON—Human influences that drive global warming are likely to have played a role in Australia's exceedingly hot summer of 2013, the hottest in that country’s observational record. A new study shows that global warming has increased the chances of Australians experiencing record hot summers, such as the summer of 2013, by more than five times.

"Our research has shown that, due to greenhouse gas emissions, these types of extreme summers will become even more frequent and more severe in the future," said Sophie Lewis of the University of Melbourne in Victoria,Australia, who is lead author of the study." 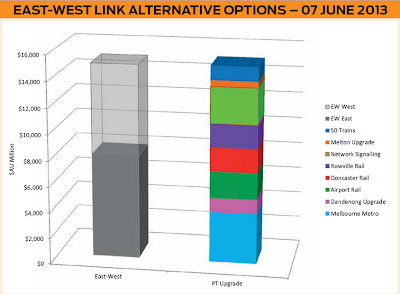 
Australian Bus & Coach, July 1, 2013
Western Australia’s Public Transport Authority (PTA) has fast-tracked the development of a new $8.2 million free bus service, ahead of major rail disruptions.
Perth commuters have again been warned to prepare for mass rail shutdowns related to the Perth City Link redevelopment planned for Friday July 12 to Wednesday July 17.
The new Green CAT bus service was launched on June 30, as part of a $46.7 million plan to ease the city’s congestion and help manage the rail shutdowns.
Western Australian Transport Minister Troy Buswell says the service will transport passengers between Leederville and Perth's CBD, starting July 1.
The service joins three existing free CAT services, which have operated for about 20 years.
“People are voting with their feet when it comes to our CAT buses, with eight million boardings a year,” Buswell says.
“They are hugely popular modes of transport and I expect the Green CAT will be the same, with commuters likely to use it as an alternative way into the city, or for those who want to head into Leederville to shop or meet friends for a coffee.”
The Green CAT will connect Leederville with the Esplanade Busport and is the fourth CAT route introduced to deal with growing population.
Seven new buses will operate on the route, which is timetabled to run Monday to Friday from 6am to 7.30pm.
CAT service passenger boardings account for five percent of the total number of public transport boardings a year.
The Green CAT has 19 stops on its route and will run every eight minutes in peak.
Each bus can potentially take more than 50 cars off the road.
at 7:52 AM 1 comment:

Green Left Weekly: "More than 200 pensioners rallied on the steps of Victoria’s parliament house on July 10.

...At the state level, they called for better pensioner concessions for utilities and council rates, free public transport for pensioners, and the reintroduction of the pensioner discount on motor registration.

In this taped interview it is agreed that free public transport would result in a 20% increase in ridership. But it was also agreed that this is a bad idea, since the buses and trains in Melbourne are already full in peak hours. That means that fares are there to ration by discouraging ridership. Instead the response should be that if 20% more people are willing to take public transport we should invest in more equipment.
at 6:56 PM No comments:

Green CAT Bus Service For Perth to Leederville: "Mr Buswell said the buses had "proved to be immensely popular in Perth," having attracted millions of passengers over the last year."
at 10:13 AM No comments: