South Australia braces for scorching heat | Herald Sun: "SOUTH Australians are set to swelter through their third day in a row of extreme heat with the temperature in Adelaide set to hit 42 degrees again.

Adelaide got to 42.5 degrees yesterday, after a 37.7 degree day on Saturday.

With 42 degrees forecast again tody, emergency services are advising people to take care of themselves in the heat.

The State Emergency Service issued an extreme heat warning for the three days, urging South Australians to take appropriate action to ensure their wellbeing during the heat event."
at 7:47 AM No comments:

The bright green shuttle buses are a $1 million investment in easy to use public transport for local families, and will provide services for up to 24,500 people a week.

This is a direct investment by Labor in public transport for western Sydney – in stark contrast to the Liberal Party who on Friday night pledged to slash $7 billion and two western Sydney transport projects – the Western Express and the Parramatta to Epping Rail link.

“These new buses will help families in western Sydney and the Central Coast who are feeling the pressure of the cost of living,” Ms Keneally said.

“Today’s announcement is a solid demonstration of Labor’s commitment to improving public transport for families in western Sydney and the Central Coast.”

In total, three new buses will provide 400 extra ‘loop services’ per week. They will operate as often as every 20 minutes per day between around:

Each bus is air-conditioned and low to the floor – providing easy to use public transport for parents with prams, the elderly and people with disabilities.

The new buses are a significant expansion of the free shuttles already operating in Sydney and Wollongong – which have provided eight million people with free transport since 2008.

The bright green shuttle buses are in line with the NSW Government’s $50.2 billion Metropolitan Transport Plan, announced by the Premier in February 2010.

Under the Metropolitan Transport Plan, the NSW Government will grow the bus fleet by 1000 buses by 2020, providing better transport between people’s homes and workplaces.

Ms Keneally made the announcement today with Minister for Transport, John Robertson, Member for Liverpool, Paul Lynch, and Member for Wollondilly, Phil Costa.

“This is a fantastic initiative that will deliver significant benefits for local residents, local businesses and local communities in western Sydney and the Central Coast. "

Southeast Queensland public transport fares have been waived as the region begins efforts to recover from this week’s flood disaster.
Premier Anna Bligh has said, ".......making the network free for a week will keep unnecessary cars off the road....." This is recognition that fares are an impediment to making public transport the travel mode of choice. Yet once the free fare days are over (22 Jan) Brisbane public transport users will be slugged with 15% fare increases - these were planned prior to the floods. The article goes on to say that the fare increase will "go towards fixing damaged public transport infrastructure" (damaged by the floods). This is a disingenuous and opportunistic statement. One only has to ask the question of "where was the money going to go if there were no floods"?
at 8:35 AM No comments:


Is climate science disinformation a crime against humanity? | Donald Brown | Environment | guardian.co.uk: "According the New York Times article, the fossil fuel industry has 'created and lavishly financed institutes to produce anti-global warming studies, paid for rallies and websites to question the science, and generated scores of economic analyses that purport to show that policies to reduce emissions of climate-altering gases will have a devastating effect on jobs and the overall economy.'

Disinformation about the state of climate change science is extraordinarily – if not criminally – irresponsible, because the consensus scientific view is based upon strong evidence that climate change:..."
at 1:40 PM No comments: 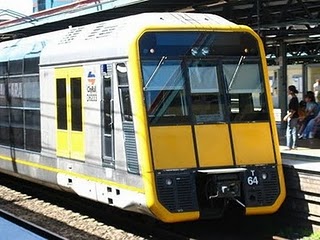 'We need to move away from car dependency and encourage more people to use public transport, but the NSW government is doing the opposite. In 2009-10 there were 2.3 million fewer passenger trips on the NSW rail network compared to 2008-09. Poor management and lack of investment over many years has pushed people out of the system. This is unacceptable for social and environmental reasons', said Harvey."
at 3:05 PM No comments:

Eventually there will be enough pain. Then, maybe, we will put an end to the private automobile.

Possibly as much as half the Australian wheat crop, or about 10m tonnes, has been downgraded to less than milling quality because of rain damage. That has tightened global supplies and sent prices up by about 45% this year, the biggest surge since 2007."
at 7:30 AM No comments: