Australia traffic questions are hard. Here are the answers. 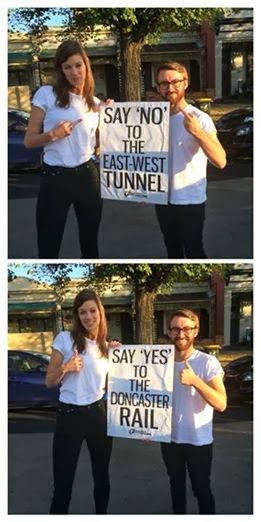 https://www.facebook.com/EastWestTunnelPledge
at 1:11 PM No comments: 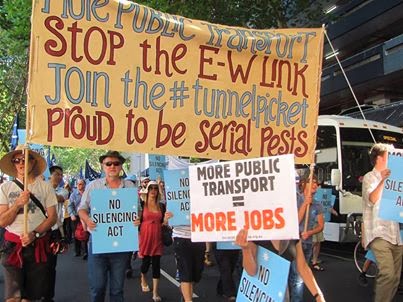 No East West Tunnel - Take the pledge: "Thanks to everyone who joined the #tunnelpicket contingent at the rally against Napthine's anti-protest laws today. We marched behind a fantastic banner and at the end lots of unionists joined in with our "No tunnel, No way..." chant. That's the type of solidarity we need to beat back these anti-democratic laws!"
at 1:43 PM No comments:

Myki Vs Free PT | Thomas the Think Engine: "In theory, Melburnians could each pay 50 bucks more tax and get free PT. Until then, a weekly zone 1 ticket costs $28.  Have fun, Melburnians."
at 2:29 AM No comments:

Greens seek economic stimulus for states | SBS News: ""By building more public housing and fast-tracking public transport projects we can find jobs for the workers facing redundancy, address the housing crisis and care for the planet all at once," Mr Bandt told reporters in Canberra on Wednesday."
at 6:29 PM No comments:

afr.com : "Now that the age of entitlement is over, when will road users have to start paying their way?

Here in Brisbane, Premier Campbell “Can-do” Newman simply cannot get his head around the idea of making drivers pay for clogging the roads in peak hour. That would only raise the cost of living, he says.

Our state government will therefore go on spending billions on freeways and other roads which are literally free to use. At the same time, however, those who use public transport have to pay a toll (called a fare) whenever they enter a train, bus or ferry. And in peak hour, these tolls are higher than usual."

Herald Sun: "The man, 31, managed to break through security early this morning and climbed atop a rig with a fellow demonstrator.
He then hooked himself on with a bike lock around his neck.
About 40 protesters formed a human chain to block workers and police from entering the Fitzroy North site on the corner of Alexandra Pde and Nicholson St." 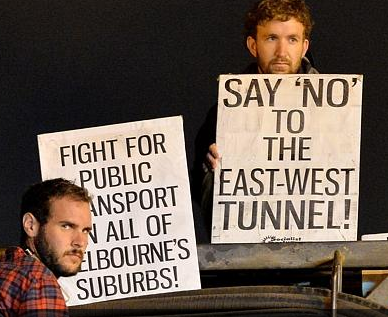 In their own words:

To all those involved in #tunnelpicket and all those who wish to join us in our fight for public transport, I must say that watching the community picket with a birds eye view from atop the rig this morning with fellow picketer Simon allowed us to see one thing very clearly: The dozens of community picketers on the ground made an awesome team effort in deploying the group's resources effectively and holding off the police and LMA from breaking our picket in order to resume drilling. Without a mass of picketers, individual tactics like locking on are a complete waste of time and way more dangerous. Because the 50 or so picketers on the ground worked so well together we were successful in holding up drilling for up to 1hr 45min this morning. Everyone who supports the fight to stop this dud #eastwestlink should make an effort to join our pickets. We cannot win this alone, every person has a role to play! Like the page No East West Tunnel - Take the pledge and txt 'tunnel' to 0432 447 036 to receive our action alerts. We will be back tomorrow!
at 6:08 AM No comments:

Building roads has not reduced congestion in Melbourne area