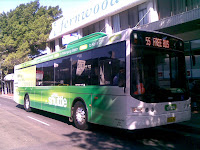 MEDIA RELEASE **
Monday January 31, 2011 - Local state election candidates for the Socialist Alliance have welcomed the news that passenger numbers on the free CBD shuttle bus are increasing. They have repeated calls to expand the shuttle service to other areas in NSW and to make all public transport frequent and free.
Paola Harvey, Socialist Alliance candidate for Keira, said: 'The news that nearly 5 million passengers have used the free shuttle service really vindicates our position that if you make public transport frequent and free, people will make the switch. The CBD shuttle initiative has been a wonderful departure from Labor's decades long neglect of our public transport system, particularly our rail.
'Dramatically improving public transport would give people the option of leaving the car at home. It's a socially just response to the chronic problems of traffic congestion, lack of parking and lack of mobility faced by poorer sections of the community. It would also reduce greenhouse-gas emissions from the transport sector, which contribute roughly 14% of Australia's total emissions', Harvey said.
Jess Moore, long-time public transport campaigner and Socialist Alliance candidate for the Legislative Council, said: 'We campaigned for frequent and free public transport during the 2007 NSW election campaign. Given the social and environmental benefits of public transport use, all public transport in NSW should be made frequent and free.
'In the Begian city of Hasselt, within a year of introducing free and frequent public transport, patronage increased by 870%. And their government found they saved money overall, given subsequent savings on health, road maintenance and construction, and also on ticketing.
'We stand for publicly owned public transport, not public handouts to private companies. The current Wollongong CBD shuttle service is publicly funded but privately run. This reduces the number of public sector jobs, and needlessly complicates planning, especially across an entire state.
'Any income generated from the public transport system should immediately be directed back into the system, not into private pockets.' Moore concluded.
Posted by Chris Williams at Monday, January 31, 2011
at 6:16 AM