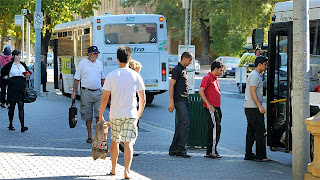 Metro taken for a ride Tasmania News - The Mercury - The Voice of Tasmania: "FREE bus services in Hobart were so popular over the weekend that Metro had to add an extra 20 runs to its Hobart timetable.

Metro's 'Have a weekend on us' campaign encouraged hundreds of locals and tourists to take advantage of free public transport in Hobart, Launceston and Burnie.

Metro chief executive Heather Haselgrove said it was too early to give exact numbers, but a contingency plan to roll out more buses if needed was applied on Saturday with the company adding 20 extra services in Hobart.

The first-time initiative was launched as a way of encouraging people who had not used public transport for many years to get back on buses."
at 8:16 PM