BY Morgan ClendanielTue Jul 12, 2011
A Spanish city, in a bid to end congestion, has made its citizens an offer: Give up your car and ride our trolley for free, forever.

People love their cars. They're willing to maintain a car even when it's expensive and difficult. In the Spanish city of Murcia, which had become crowded with vehicles, the government decided to try to pry people's hands off the wheels by offering a little economic incentive. Not only would you not have the inconvenience of trying to park, you could ride the city's public transit for free for the rest of your life.

To promote the campaign, the city made a series of adorable advertisements showing how unpleasant it is to be stuck in traffic and looking for parking all the time.

And just in case some Murcia residents hadn't noticed how annoying it was to have a car in the city, they also started leaving cars in impossible parking spots, like this one, where the car is forced to sit on two other cars to find a space. 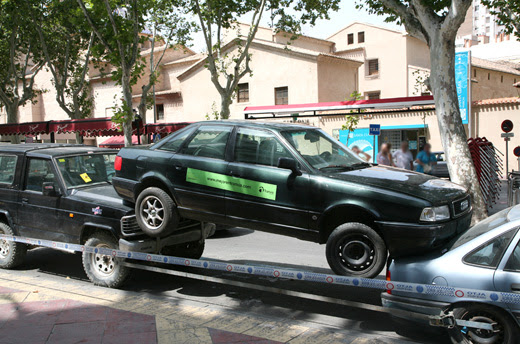 Seeing that, a lifetime trolley pass looks quite enticing. While many cities have campaigns to encourage public transit use, and a few use congestion pricing to help limit the number of cars in the city centers, this is an impressive use of city funds to directly influence how people get around the city. A lifetime trolley pass is probably a minimal cost for the city (though most transit systems are already bleeding money without giving away free fares), but with enough given away, could make a drastic difference in the livability of the city.