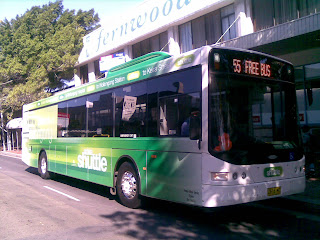 Monday October 26, 2009 - The success of the free shuttle bus in Wollongong (pictured) has stirred the Socialist Alliance to renew calls for public transport to be made free across the state of NSW.

Illawarra Socialist Alliance convener, Chris Williams, said: 'Wollongong's free shuttle bus has been used over 1 million times now - an amazing uptake. It proves that when public transport is made free and frequent, people will make the switch. Given the success of the shuttle, the NSW government should commit to a publicly owned and upgraded, free public transport system. It's a socially just answer to the chronic problem of traffic congestion, lack of parking and lack of mobility for poorer sections of the community'

'Encouraging people to leave their cars at home by providing a real alternative would also greatly assist efforts to reduce global warming. Transport is responsible for 14% of Australia's greenhouse-gas emissions, and road transport accounts for around 90% of that share. Trains are 40 times more energy efficient than cars, so enabling people to make the switch would have huge implications for Australia's emissions reduction targets.

'Making public transport free would also massively reduce costs associated with air pollution, car accidents, traffic congestion, motor vehicle waste disposal, noise pollution and road maintenance. It would more than pay for itself in addition to the social and environmental gains. Our health and environment demand this kind of action; the outstanding success of Wollongong's free shuttle shows it's viable', Williams concluded