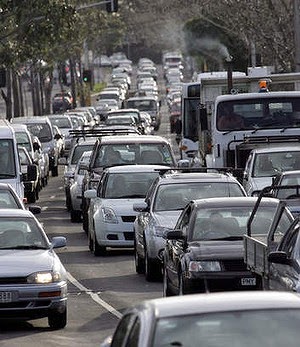 the age : "In Victoria, the East West Link business case is being treated as a state secret. It has been hidden from the public and Assessment Committee alike. Documents obtained under freedom-of-information legislation disclose the strong criticisms made by consultants of the methodology used to produce a positive financial return.

The inclusion of “wider economic benefits” delivering over 40 per cent of the claimed return has been widely criticised. No justification has been offered. Minimal information has been given about the tolls to be charged and the impact on driver behaviour.

The traffic modelling evidence is that congestion levels will be worse than the present within 10 years. One only has to observe the peak-hour crawl on CityLink or the Burnley Tunnel to see that the promise of new freeways delivering free-flowing peak-hour traffic is a mirage."
at 11:53 AM